Painted on 25 October 1939 — the artist’s 58th birthday — Femme assise, robe bleue  is a searing portrait of Picasso’s lover, Dora Maar. The work is filled with the unique character and tension that mark Picasso’s greatest portraits of Maar.

This picture was formerly owned by G. David Thompson, the Pittsburgh steel magnate. The art historian Alfred H. Barr described Thompson as ‘one of the great collectors of the art of our time’. Many works from his collection now grace the walls of museums in the United States and Europe.

‘Femme assise, robe bleue  exhibits all of the most exhilarating qualities that Maar brought out in Picasso’s work,’ says Jessica Fertig, Senior Specialist in Impressionist and Modern Art in New York, referencing the striking palette, ornate headwear, and remarkable complexity conveyed by Maar’s distorted features. The rich, thick swirls of oil depicting the mass of her hair — which mesmerised Picasso — and the shapes of her hat convey ‎the passion at the core of this portrait. 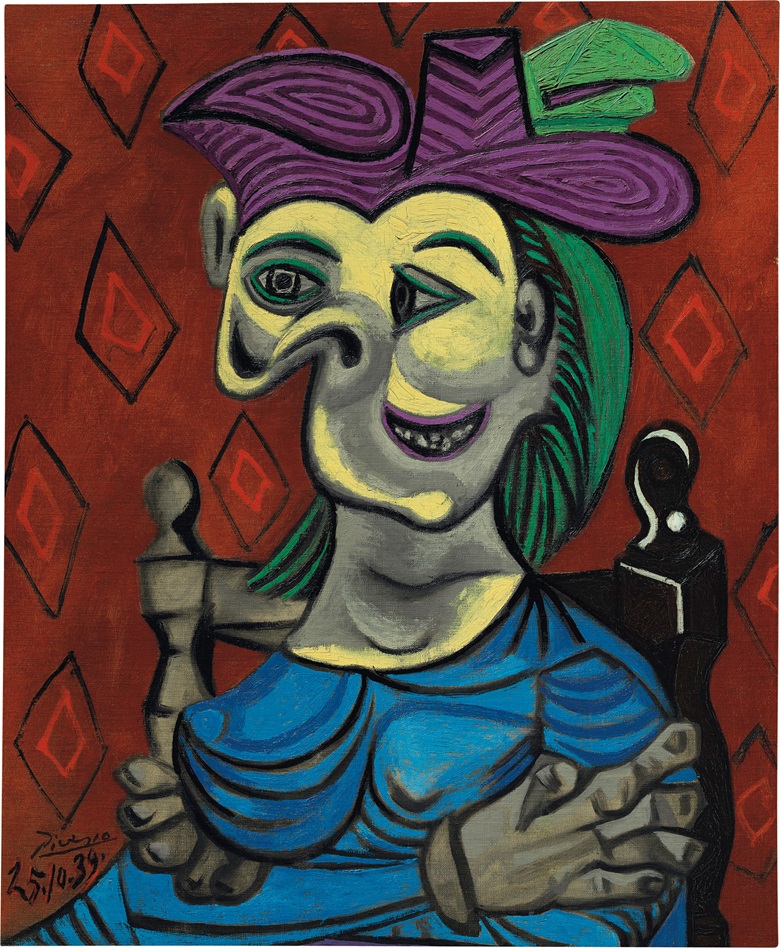 Femme assise, robe bleue  comes to the market at a time when the demand for Picasso’s portraits of Dora Maar is at an all-time high. As Francis Outred, Chairman and Head of Post-War and Contemporary Art, explains, the picture also ‘holds within it an incredible story’.

The painting originally belonged to Picasso’s dealer, Paul Rosenberg, but was confiscated in 1940 soon after its creation. It was meant to be transported to Germany but was intercepted and captured by the Free French Forces — an event immortalised, albeit in fictional form, in the 1964 movie The Train, starring Burt Lancaster and Jeanne Moreau.

In real life, one of the people who helped to sabotage the Nazis’ attempt to remove countless artworks from France towards the end of the war was in fact Alexandre Rosenberg, the son of Paul Rosenberg. He had enlisted with the Free French Forces after the invasion of France in 1940, and was a lieutenant in the Second Armoured Division when he led the platoon of nine men who stopped the train.

‘We fully expect the power of this painting and its remarkable story to capture the hearts and minds of our global collectors of masterpieces this May,’ comments Outred.

Dora Maar was one of Picasso’s most important muses. Their affair began in the latter years of the artist’s relationship with Marie-Thérèse Walter. Walter had been young, blonde and athletic, with a sunny disposition and a sweet character; Picasso’s time with her had resulted in flowing, sensual images.

Maar, as demonstrated by Femme assise, robe bleue, was a contrastingly complex, troubled character. An intellectual and creative, and a photographer and artist in her own right, she was a sparring partner for Picasso, having already established herself in Surrealist circles by the time the pair were introduced.

Picasso often presented Maar wearing the hats that she favoured, a quality that distinguishes her among Picasso’s muses at first glance. In Femme assise, robe bleue, the hat is a striped purple confection with what appears to be a green feather or foliage of some sort. These hats often add a playful air to Picasso’s paintings of Maar. They also counterbalance the severity with which he presented her features, as is the case in the shifting, vulnerable flesh of Femme assise, robe bleue.

Some critics have linked the pictures of Dora Maar specifically to the tensions caused by the Spanish Civil War and the Second World War. Whatever the truth of this idea it appears that Picasso, whose paintings often functioned as a barometer for his own state of mind, had found a muse who perfectly reflected his fraught depictions of that period.

Sign up to receive information about upcoming Impressionist and Modern Art auctions, events and more.